The American Psychological Association defines affirmative action as a catchall phrase referring to laws, customs, and social policies intended to alleviate the types of discrimination that limit opportunities for a variety of demographic groups in various social institutions. Some of the criticism regarding affirmative action has caused public opinion to perceive affirmative action policies to be tantamount with quotas, set-asides, and special treatment that benefit minorities and women at the expense of white males. Both sides of the political arena have debated over this issue during the past 45-year history of affirmative action. Companies today have made many changes to bring cultural diversity in the workplace; however, has Affirmative Action benefited business and employees in the way the laws have intended?

Back in the 1960’s, Affirmative Action was introduced during the Kennedy Presidency around the time of the Civil Rights movement. This policy called for minorities and women to be given special considerations in employment, education and contracting decisions. Education institutions used this policy in recruitment to achieve diversity and achieving goals. Similarly, today Admissions Officers can look at two similar qualified applicants and choose the minority over the white person or a manager to hire a qualified woman for a job over a man. The idea is not to base the decisions on quotas or give preferential treatment to an unqualified candidate based on gender or race, which can be grounds for reverse discrimination.

Although there have been recent gains in employment participation and income levels among women and black males, the current data suggest that gender and race separation in employment, as well as discrepancies in pay, continue to exist even when employees have equivalent qualifications.

The following 1995 report provided by Murrell and Jones shows some statistical information regarding percentage values of men and women in the workforce.

Based on 1992 data, both white females and black males must work about 8 months to earn a salary equal to what white males earn in 6 months. Black females must work 10 months to earn comparable salaries. Fewer women and minorities were promoted to senior levels in organizations. Women and minorities are more likely to experience job interruptions due to downsizing and restructuring, which, in turn, have a negative impact on lifetime career mobility and earnings.

Affirmative action affects businesses in two main ways. First, it prevents businesses with 15 or more employees from discriminating on the basis of race, color, sex, religion, national origin, and physical capability in practices involving hiring, compensating, promoting, training, and firing employees. Second, it allows the state and federal governments to favor women-owned and minority-owned businesses when awarding contracts, and to reject bids from businesses that do not make good faith efforts to include minority-owned businesses among their subcontractors. The following table provided by Crosby and Cordova illustrates the differences between Affirmative Action policies and the Equal Employment Opportunity Act (EEO).

Large corporations have realized a need to have diversity in the workplace.  In 1994, the United States Department of Labor presented Proctor & Gamble the Opportunity 2000 Award, which is given annually to one company committed to instituting equal employment opportunities and creating a diverse workforce. Proctor & Gamble was recognized for its multifaceted, comprehensive affirmative action and executive development programs. In May 1995, Edwin L. Artzt, then chairman of the board and CEO of Proctor & Gamble, received the Private Sector Leadership Award from the Leadership Conference on Civil Rights.  In support of affirmative action, CEO's of corporations including Exxon, 3M, Boeing, Amoco, Bechtel, Goodyear, Sony Electronics, and Dupont believe that "a society with a history of deeply rooted exclusionary practices demands proactive policies to create opportunity and to eliminate both conscious and inadvertent discrimination.... We believe that developing and utilizing the full potential of the entire population of our society is critical not only to our nation's economic growth but to our political stability, to our social well-being, and to our global leadership responsibilities" (Wall Street Journal, 1997). Having seen these trends for decades, today's corporate leaders view affirmative action as a business necessity in an increasingly diverse world. By expanding the pool of talent for companies to draw on, affirmative action brings diverse skills and backgrounds into the workforce, thereby helping firms compete domestically and internationally.

Is reverse discrimination prevalent in school admission or in the hiring and promoting processes of business? There was a court case that showed flaws in the Affirmative Action policy even though the original intention of the policy was to do good for people. Reverse discrimination became an issue, by the famous Bakke case in 1978. Allan Bakke, a white male, had been rejected two years in a row by a medical school that had accepted less qualified minority applicants-the school had a separate admissions policy for minorities and reserved 16 out of 100 places for minority students. The Supreme Court outlawed inflexible quota systems in affirmative action programs, which in this case had unfairly discriminated against a white applicant. In the same ruling, however, the Court upheld the legality of affirmative action.

To conservatives, the system that opened the door for jobs, promotions, or education to minorities also shut the door on whites. In a country that prized the values of self-reliance and pulling oneself up by one's bootstraps, conservatives resented the idea that some unqualified minorities were getting a free ride on the American system. "Preferential treatment" and "quotas" became expressions of contempt. Even more contentious was the accusation that some minorities enjoyed playing the role of professional victim. Why could some minorities who had also experienced terrible adversity and racism-Jews and Asians, in particular-manage to make the American way work for them without government handouts?

The debate about affirmative action has also grown more murky and difficult, as the public has come to appreciate its complexity. Many liberals, for example, can understand the injustice of affirmative action in a case like Wygant (1986): black employees kept their jobs while white employees with seniority were laid off. Many conservatives would be hard pressed to come up with a better alternative to the imposition of a strict quota system in Paradise (1987), in which the defiantly racist Alabama Department of Public Safety refused to promote any black above entry level even after a full 12 years of court orders demanded they did. In a landmark case in 2003, the Supreme Court ruled 6-3 in favor of a more formula based approach be used in the University of Michigan by using a point system for their admissions process, awarding additional points to minorities. This case is considered a landmark decision because it paves the way for other universities to follow this course.

The Commission was created during the Bush administration and directed by former Secretary of Labor Lynn Martin. Members of the Commission represent business as well as advocacy groups. The report, titled A Solid Investment: Making Full Use of the Nation's Human Capital, stated that women are making progress, but the "rate of change is discouragingly slow". Former Secretary of Labor Robert Reich, in a message accompanying the report, commented, "Narrowing the pool of talent from which they draw is--among other things--a blunder in competitive tactics" (American Council on Education, 2008).

Today, more women are in the pipeline for top corporate jobs. In 1980, white women accounted for 27.1 percent of all middle- and upper-level managers, while women of color accounted for 3.2 percent. By 1990, those numbers had risen to 35.3 percent for white women and 6.9 percent for women of color. Women have achieved the most success in the fields of finance, insurance, and real estate.

An example of income analysis below shows the differences in how a higher education for women or minorities does not necessarily mean higher earnings compared to white males. 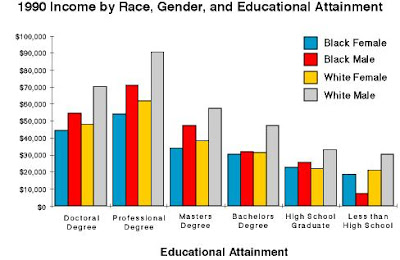 A 2005 comparative analysis from the United States Census Bureau shows statistics that have not changed in significant numbers from the 1995 analysis. This further illustrates that the debate still rages on as to whether future statistics will change to balance or equal out income levels for today’s workforce. 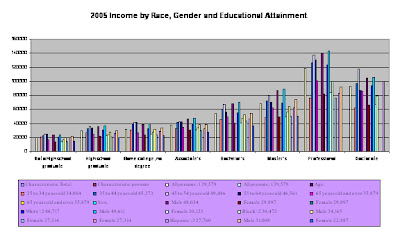 Even though Affirmative Action has helped people of race and gender, affirmative action is still needed to protect people where the laws (EEO) are still vague.  With Large companies, such as Dupont, Boeing, 3M and Sony, for example, having recognized this, they have put practices in place offering equal employment opportunities and creating a diverse workforce. By drawing on diverse skills and backgrounds this allows companies to compete both domestically and internationally. These practices focused on leadership and career development, rotation and non-traditional employment, mentoring, workforce diversity, and family-friendly policies. The underlying motive for affirmative action is the Constitutional principle of equal opportunity, which holds that all persons have the right to equal access to self-development. In other words, persons with equal abilities should have equal opportunities. The question still is pondered as to whether Affirmative Action has benefited business and employees in the way the laws have intended. Both sides of the political platforms argue their points either for or against affirmative action. Are white males being victimized due to their race because of affirmative action? Being there are varied points of view on the subject, in some cases white males have been victims of reverse discrimination. Most of the time it is still women and minorities that are not climbing the corporate ladders as quickly as their white male counterparts. As the data shows through out the last few decades, improvements have been made to drastically improve workplace diversity and university enrollment. However, many still believe that the place one holds in society, whether it be by educational or workplace standards, should be by earning one’s way through hard work and studies and not be given a free ride to the top because of one’s gender or ethnicity.

L. Ryerson
I have a Bachelors of Science in Business and Global Business Management from the University of Phoenix and an MBA with international business emphasis from the University of Redlands. I love to write about interesting topics. I have more than 20 years industry experience in Accounting, Finance, Banking, Mortgage Real Estate, bio-pharmaceutical, education, and defense contracting.